Understanding The Look and Feel of Letters and Numbers

Think of any brand that you love.

There is a good chance that every time you see the name of their company that it will appear a certain way.

That is because they are using something called “typography” to define visually who they are.

Typography is a bigger term for the “style and appearance of printed matter.”

Now, what does that really mean?

Basically, someone designed the look of all the words that you read.

For example, when you pick up a copy of the New York (or Los Angeles) Times, the words on the paper have a very specific look to them.

When you create a “collection characters with a similar design” it is then known as a font.

This might start to sound familiar since every user of Microsoft Word has access to a set number of fonts since its creation.

Why does this matter?

Because it does (whether you are aware of it or not)…

The way that something looks has a story attached to it and stories over time have been built on the back of other stories.

Each of these examples sends a particular message. In the case of Harvard, the font instills the image of prestige and exclusivity.

In the example of “Comic Sans,” the first thing that you think of is a clown. Not something that you need to take very seriously.

Seth Godin wrote on this subject back in 2013 suggesting that people should use the fonts Franklin Gothic for a headline and Garamond for body text.

Since Seth Godin’s post, it is interesting to see that on his latest redesign of Seths.blog he has chosen to use Source Sans Pro for his headlines and PT Serif for his body text proving that everything evolves with time.

I do understand that the point he was trying to make is “have a reason for the font you choose.”

Google also just changed all of their app fonts recently to Montserrat because they shared publically that it is better for people that use mobile devices.

While every design conveys a meaning, what I have also learned is that we need to keep in account that each culture views and interprets symbols and styles differently.

Take a look the image below from Westminster, California: 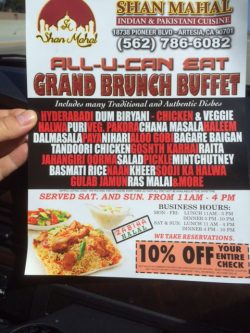 A good designer will look at this menu and think that it breaks every rule in the book. But, when I was overseas visiting Vietnam, this design style was extremely common.

Here is yet another example: 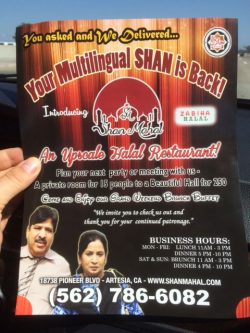 In both of the above examples, you can see that they are using MANY fonts and sizes. There is nothing consistent and I would personally view it as a “mess.”

But, my opinion doesn’t matter. This is normal for that culture.

I help entrepreneurs, business owners and freelancers solve problems. Whether you need me to guide you or solve something before me, I’ve got your back. Click here to learn more.
Oh, by the way, I can help you with this...
Click here to ask me a question »

The rule I usually try and stick with is to use no more than 3 fonts. Your logo can be independent of this but the more uniform something looks the better organized your design will appear.

Conversion Rate Optimization expert Bryan Eisenberg calls this “scent.” The basic rundown is that if your brand logo is blue, you might not want to have your ads be all red. This just doesn’t work well.

At the end of the day, a brand is something that starts to stand for something bigger. You can almost utter the words “does that look like us,” and you will start to hear a yes or no.

I can’t image Harvard changing their font to resemble something that you will see if you attend the local circus. That is because that is not who they are and they will always design and shape their message based on who they want to be.

PrevPreviousTsundoku (積ん読)
NextGet Paid By Your ClientNext
READ THIS NEXT
Write To Rank Your Blog Posts On Google: Definitive Guide
Menu